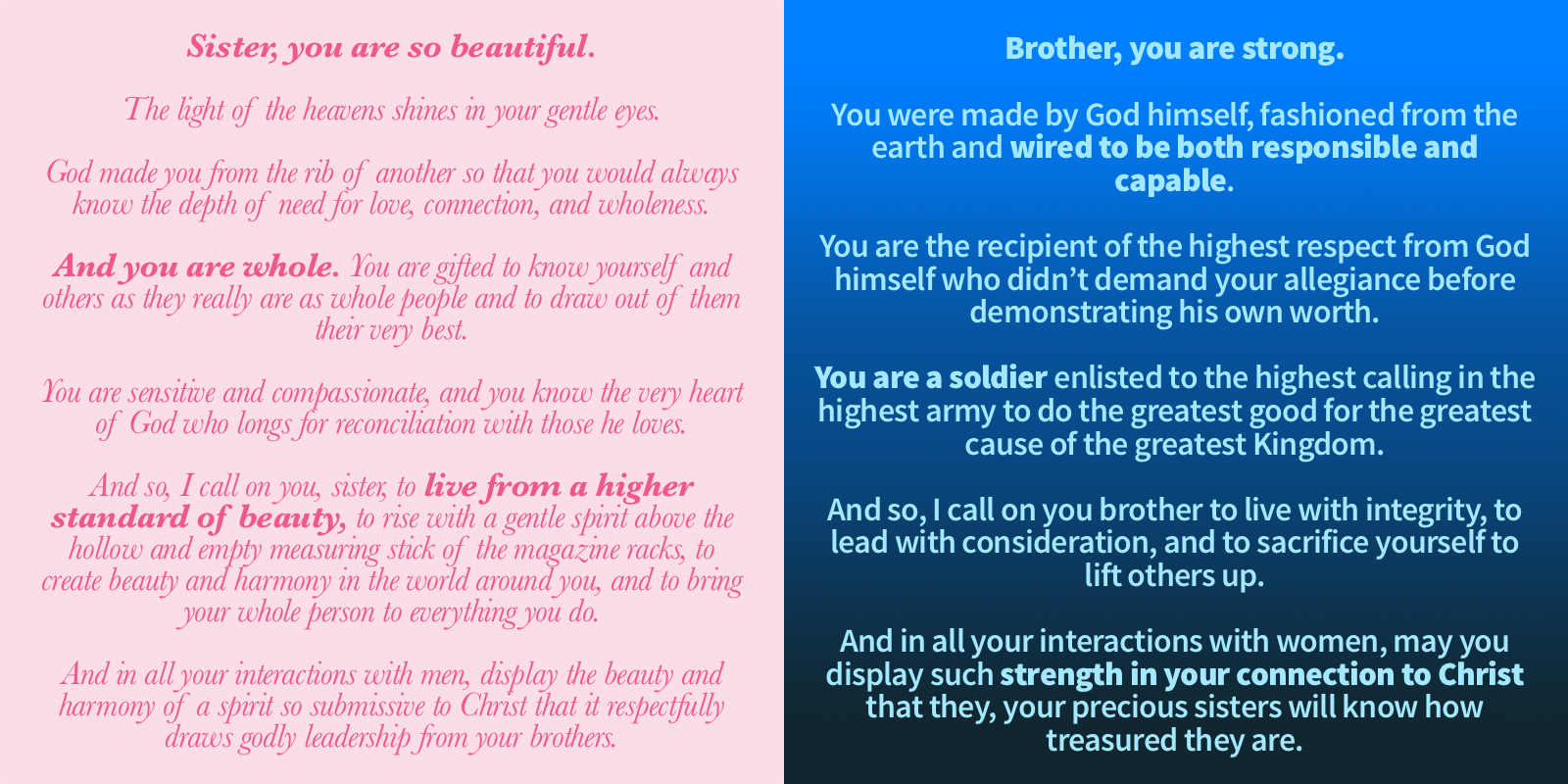 This past week, I tried an experiment.

I posted a couple images to my Facebook timeline that I thought had the potential to become somewhat viral. That is, I thought these images would be shared around Facebook, and I wanted to see how widely they would go.

Well, my little experiment took me in a different direction than I thought it would.

So here’s the back-story.

A couple years ago, I taught a series of messages at Lafayette Community Church called Born this Way. The intent of the series was to cover some of the Bible’s teaching on gender issues; however, in the first message, I realized that I was talking about something really sensitive especially since I was promoting a view of gender known as “Complementarianism.” (I’ll talk about that in a moment.) But I didn’t want the message to end in any way negative, so I rather than concluding that first message with suggestions on how to live, I concluded that message by reading two “blessings” for men and women.

The sentiments in these blessings are deeply held in my heart, and I actually had a hard time getting through reading the Blessing to Women on that Sunday because my heart so deeply desires for women and men alike to step into their beautifully harmonious places in God’s world.

The blessings were so well received by people that Sunday that I thought they would be a good starting place for my social experiment of facebook sharing.

I posted the blessing to women first simply because the majority of shared photos I see on facebook have that kind of tone to them.

However, that photo got zero shares.

I got a number of likes, but not any shares.

Instead, very soon after I posted the photo, a friend of mine from college days left a comment calling me out for this blessing which in his eyes was advocating a view of gender that he couldn’t support.

What he said clearly indicated to me that he was coming from an “egalitarian” perspective, and I wondered if I should delete it or respond. Well, I’m usually a person who supports more dialogue rather than less dialogue as long as the dialogue can be done with a respectful tone, so I replied. As a result, the comment thread very quickly turned into a conversation between him and me about egalitarianism vs complementarianism.

Let me explain what is meant by these two terms.

The key concept for them is “full equality.” Which for them effectively means (according to the rest of their core document) that there is no distinction ever to be made between two individuals solely because of gender. Their foundational document does nothing to identify a definition of “Man” or “Woman” or gender more generally, but it doesn’t really need to because it asserts that gender should never be any kind of issue. The only thing to consider is how a person has been gifted and called by God.

Specifically, much of their mission is to speak against the traditional approach to biblical interpretation that would indicate that there are certain roles in the church and in the home that are “male” roles and other roles that are “female” roles. For example, there are passages in the New Testament where the traditional interpretation is that the “elders” of a church should be “husbands” (exclusively male) and also that “wives” or “women” should keep silent in churches and never have authority over men in the church. The CBE exists to speak against those interpretations of Scripture.

Now, I have already said that I myself adopt a complementarian perspective, but I don’t want to seem like I’m painting egalitarianism in a negative light, so I want to say one thing very clearly about egalitarianism:

Even though I disagree with their conclusions, I believe the CBE is attempting to be solidly biblical.

I want to make it absolutely clear that I think the people in the CBE camp are honestly trying to be biblical. One of their mantras is that Scripture is to be interpreted holistically, thematically, and culturally, and by that, they mean that one passage of Scripture should never be taken out of context from the rest of the teaching of Scripture, that the themes and intents of the immediate context are also to be taken into account, and that the only way to understand the author’s true intent for any text is to understand the unique cultural situation of that author.

Therefore, they conclude that the overall tone of Scripture is gender equality, and that any individual passage which seems to indicate different roles for different genders only does so because of the specific theme of the context (sarcasm in some cases) and/or an oppressive cultural framework in which that passage was written. They don’t downplay any Scripture (usually), but they will clearly teach that some parts of Scripture are overshadowed by the overwhelming tone of the rest of Scripture.

As a result, their focus is far more on the text of the Scripture than it is on the cultural millieu of 21st century western thought.

Complementarians are mostly represented by the Council on Biblical Manhood and Womanhood although there are rather different perspectives within that camp regarding how complementarianism is actually to be played out in real life. The concepts are not hard to understand, but the specific behaviors promoted by those concepts are to be debated.

The essence of complementarianism is described briefly in their Core Beliefs, but point #2 will suffice for our purposes here:

Therefore, the complementarian perspective is that God has ordained for men and women to be uniquely different both in behavior and in attitude, and that associated with these ordained differences, there are different roles or realms of responsibility that are unique to men and women.

On the surface, this sounds like the same kind of attitude that both sides call “traditionalism” which is an approach claiming that men and women should serve different roles in society because men are inherently better than women at things like leadership and decision-making. Traditionalism sometimes goes so far as to say that men are more valuable than women or that women can be treated as property of their men.

However, complementarianism says little more than this (my own words):

Men and women are intrinsically different in ways that only God fully knows, and therefore, when the Scripture seems to indicate differing roles or responsibilities for men and women, we should take those at face value. Nevertheless, we must always honor the clear commands in Scripture that everyone is to treat everyone else with love and respect because all human beings bear God’s own image.

Our society has had its vote.

Given these two perspectives, it is abundantly clear that we in the Industrialized West live in a world that has fully embraced the concepts of egalitarianism. In fact, our society has embraced egalitarianism so fully, that all notions of “male” and “female” are beginning to blur away. The acceptance of homosexuality in our world is but one illustration of this blurring of gender lines.

It is also abundantly clear that in the workplace, gender differences are to be ignored. I don’t know of anyone who thinks that the salary gap between men and women is an honorable practice (nor do I).

Moreover, societal roles that have been dominated by men are completely fading away. More and more churches have women pastors. More and more homes are being led by the women in both household leadership and bringing home the bacon. More and more men are also taking on traditionally feminine roles of homemakers, beauticians, school teachers.

Clearly, our society is pushing forward the idea of “full equality.”

But I don’t want to talk about all that

I didn’t start this blog post to address the details of egalitarianism verses complementarianism or to address the virtues or woes of our current society. I simply wanted to raise one little question:

Is there any value in reclaiming a society with clear gender lines?

I am not going to answer this question here, but I’m going to give just a couple points of framework for the discussion.

None of these, with the exception perhaps of the third point above, can be attributed to nurture, and yet, they are clearly an aggregate reality of distinctions between men and women.

So we are left with an interesting dilemma, and this is the question I want to toss out there for you.

Or worded differently, perhaps one of these questions will relate better:

Is it good or right to have a society where certain aspects of gender identity are intentionally nurtured into our children?

If you can speak with cordiality and respect, please join the conversation with your thoughts.

One thought on “A Different Question about Gender Differences”